This instrument is a flat drum with a membrane divided into 7 alveoli each producing a different tone, similar to the tones of a drum kit. The surface of each alveolus varies in size (small, medium or large) which allows different tones from a single membrane with only one tension. The alveoli’s positions make it a very easy instrument to play. The instrument can be acoustic or electric.

Resulting from a mix of the vibraphone and the xylophone, this percussion instrument has 44 bars made of wood, metal and composites of metal-wood-bamboo. The bars are interchangeable and give timbre variations from the sound of wood to the sound of metal. Thanks to their mobility, the instrument can freely use different scales of 5, 7, or 12 tones. Each pipe is tunable in order to adapt to the bar it will amplify. It also has a resonant membrane like the ones that can be seen on the African balafon and a spinning cap that can shut off the tube and produce a sound without an echo. A mechanism made of 4 pedals generates different effects: closing the spinning caps, opening and closing the resonant membranes, forte pedal and piano pedal.

The percutube is composed of 8 different length bamboo pipes open at each end. It covers an octave that corresponds to a range of DO in major (C in major).
The acoustic principle of this instrument is based on the resonance of the air inside a pipe which is drummed at the end. The height of the note depends on the length of the pipe. The necks of each pipe have been narrowed by a composite membrane (skin and wood) that allows the emission of the harmonics.

Different strikes are possible, including the main ones:
- an open strike (the hand is removed immediately: basic note),
- a closed strike (the hand remains : inferior octave),
- striking the membrane (to emit the harmonics)

This instrument is similar to the African Talking Drum (also called an armpit drum). The tension of the skin can be modified while it is being played by applying pressure to the body of the instrument.
The bevel drum is composed of a piece of skin stretched over a bevelled cylindrical barrel. It is played, with the right hand using a drum stick, a brush or similar, and with the bare left hand.
Different accessories can be used: cymbals, micro-hit hat or snare drum, etc.

Made of hard and dense wood (rowan) and duralumin (an aluminium alloy), this suspended framed drum has a single animal skin membrane of adjustable tension.
When the membrane is stimulated by being struck, the vibrations are echoed by the dense material of the frame which keeps the vibration going (phasing effect) and gives the instrument long sustain. 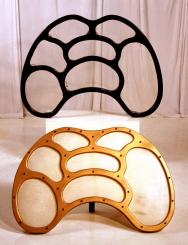 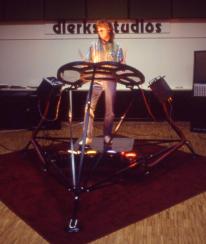 Click on the photo to enlarge it
Installer le player flash